This blog post comes from Anna Sparre who runs the company 4Health. Do you want to go to her page and get more inspiration and listen to her podd go into www.4health.se  or on her instagram page

Thank you Anna for your great blog post about radiation and its effects.

Anna is a dietician, civil engineer and personal trainer. At 4Health, you can be inspired for better health by influencing the right processes in the body. She also gives lectures, gives dietary advice and has courses.

Electromagnetic radiation is found naturally from thunder, the sun and space. Radiation has increased with the artificial radiation we humans have created with technology since the beginning of the 20th century and it has become part of our everyday lives with mobile phones, wifi, computers and microwaves. But also with ordinary electricity for chargers, lamps and refrigerators. We surf, stream entertainment, play online games and so on. We are exposed to radiation around the clock - not least because most of us have our mobile phones at arm's length and are constantly on.

Our children are exposed to wireless radiation early on and many preschools are constantly connected with wifi and use a reading tablet with the children daily. Even in working life, we are surrounded by wireless technology. There is really nowhere where we can escape the radiation completely today.

Some researchers today believe that radiation should be considered "carcinogenic to humans" in the same class as asbestos and tobacco. The WHO classified all wireless technology as early as 2011 as possibly carcinogenic to humans (IARC group 2B). Today, radiation is a current topic as 5G rolls out. 5G has a higher frequency than 4G and denser between the base stations (max 150 m) How this pope
we do not know yet in the long run.

There are different things and ways to measure. In English, one usually e.g. talk about Electromagnetic Fields (EMF), Radio Frequency Fields (RF) and "Dirty Electricity". But more on this in an upcoming podcast.

Radio waves can pass through the human body without being noticed and microwaves (with a wavelength of about 1 cm) penetrate a few centimeters without being stopped by the skin. For the shorter wavelengths, ultraviolet, X-ray and gamma radiation, the high energy of the photons can ionize atoms. This is called ionizing radiation and can cause cancer, among other things.

Mobile phones, cell towers, wireless networks and wireless computers can potentially make you sick. This is because wireless technology emits microwave radiation. Recent years 'research has confirmed that microwave radiation can damage the brain, our cells' DNA and increase the risk of cancer.

Not everyone gets the same or all symptoms and the sensitivity varies. It depends i.a. on age, previous diseases, inherited sensitivity, previous exposure to radiation or to chemicals, heavy metals and other toxins.

Electromagnetic radiation is propagated differently in different materials. Our bodies have varying electrical conductivity. Some of the radiation is reflected towards our bodies and some is spread further into the body (transmission, diffusion and absorption). The ability of radiation to penetrate the body is frequency dependent. Lower frequencies penetrate deeper than higher ones. Fat and bone are easier to penetrate than muscle and skin. 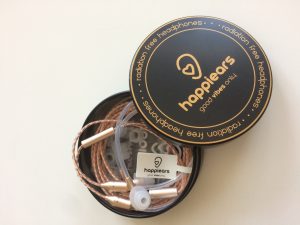 Here are some tips to help reduce your EMF exposure: The products I link to above come from Swedish Happiears. The headphones have a trachea instead of a regular cable the last bit before the ear. This reduces the radiation up to the head by 98%. The cable is made of finely woven copper wires that prevent the transmission of high-frequency electromagnetic waves. It also makes them more durable.

The blanket has a underside that is made of silver threads that reflect the radiation away from the body and the top is made of cotton (organic). It provides protection against EMF radiation by 97%.